You are here: News & Views > How to Survive the Office Christmas Party

How to Survive the Office Christmas Party 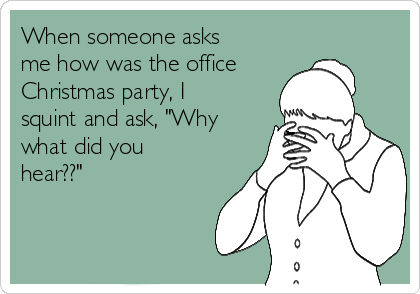 Party season is upon us and no doubt you’ll be looking forward to lots of celebrations with family and friends. However, there’s another celebration imminent which often fills people with a sense of dread… the Office Christmas Party!

The Office Christmas Party can be a potential minefield – a chance to let your hair down after a year of hard work, but let it down too far and you could risk being part of the water cooler gossip well into the New Year!

Whether you’re having an extravagant shindig at a local hotel, or a budget bash in the office there are certain ‘rules’ that you’d be wise to stick to to save you from social – and potentially professional – humiliation. If you get the balance right, the Office Christmas Party can be an event to remember – for all the right reasons!

If you have a boss whose generosity extends to a free bar, be careful not to over indulge, no matter how tempting it may be. Set yourself a limit, or at least try to space your drinks out with water or a soft drink in between.
If you’re having to pay for your drinks , then that might help you to curb your alcohol intake, particularly if your party is in a hotel as drinks are likely to be expensive.  If you’re worried about overspending, then set yourself a budget beforehand and stick to it.   Take out the money that you’ll need from a cash machine and leave the credit cards at home, that way there’s no way you’ll get carried away and overspend.  Just don’t forget to keep enough spare for the taxi home!

If you’re worried about carrying a large amount of cash in your wallet or purse, then you may wish to use a pre-paid card.  You can load on the amount of cash that you’re willing to spend and you don’t need to worry about overspending or going overdrawn.

There will always be someone who takes the drinking to the extreme – don’t forget by drinking less, you’ll be the one who’ll remembers the embarrassing stories and hopefully won’t be a part of them!

Just because you’re in the office, that doesn’t mean you have to discuss the latest marketing campaign, or how much the annual budget is being overspent by. Of course, if you’re trying to impress the boss and she/he asking you questions about your role, then be sensible about it. You don’t want to go to the other extreme and come across completely disinterested in what she’s saying, instead choosing to whisk her onto the dancefloor as soon as Slade comes on. But where possible, try to stick to more neutral subjects and use the opportunity to find out what your colleagues like to do outside of work. It might even make Nigel from accounts seem like a much more interesting person. Maybe, just maybe….

Making the most of the Mistletoe

The office romance is a bit of a cliche, but it wouldn’t be a proper Office Christmas Party without it now would it? Perhaps you’ve been flirting with a colleague for a while and you’re hoping for a Tim and Dawn moment from ‘The Office’ but more likely it will be a quick fumble in the stationery cupboard with the geeky guy from IT whose name you can barely remember.
It’s surprising who becomes attractive when you have beer goggles on, but don’t forget that you’ve got to work with these people again so try not to do anything you’ll come to regret.
Office parties often give you the opportunity to speak to senior people in your company that may not usually be so accessible, but try to be yourself (your sober self that is). Shameless flirting with the boss to try and earn a promotion may not be the best tactic!

Social Media is Not Your Friend

Well at least not on the night anyway….It used to be the photocopier that was the thing to avoid at the office party, but nowadays its the mobile phone and any social media apps that happen to be on it! Tweeting what you think about your boss or posting random selfies to Facebook whilst under the influence of alcohol may seem hilarious at the time, but it may be something you come to regret the next day. You may just find yourself slightly humiliated by some dodgy looking photos, but at worst you could be facing disciplinary action. No harm in taking a few pics in order to have some memories of the night, but don’t automatically post them to your social media account. Let the hangover die down, choose a selection of your best shots and post a few days later. Keep the rest for your eyes only – or at least for blackmailing purposes in the future!

If your boss knows what’s good for him, he’ll book the Christmas party on a Friday or Saturday night, but if it’s on a week night then you’ll need to be even more careful! Calling in sick is not an option as everyone will know that it was self-induced, particularly if you’ve ignored all the helpful advice above!

I had to once, but I genuinely had Norovirus – turned out half the company did too (no, really) so I actually avoided the ritual humiliation of having no one believe that I didn’t just have the hangover from hell!

Our office party is coming up shortly so we’ll be following our own advice of course!

When is your office party? Are you the perfect employee or have you ever done something you regret? Let us know in the comments below!

The above post is intended to be informative but does not constitute advice – financial, legal or otherwise. Any opinions given are the author’s own and do not necessarily reflect the views of SO Media or the Mitchell Farrar Group.